Cocaine is a popular stimulant drug that is often found at nightclubs, parties, and other social gatherings where people are expected to maintain high energy and a positive mood. According to the National Institute on Drug Abuse (NIDA), about 5.2 million people aged 12 and older used cocaine in 2020.

Despite being a popular drug, cocaine is powerfully addictive. Cocaine addiction can have devastating impacts on a person’s mental, physical, and emotional health, causing them to require professional addiction treatment services to recover.

If you or a loved one are battling a cocaine addiction, Sheer Recovery can help you get your life back on track. We offer a comprehensive, accredited recovery program with custom-tailored treatment plans according to your unique needs. Contact us today to get started.

Cocaine is a stimulant drug that is made from the leaves of the coca plant, a plant that is native to South America. While healthcare providers are permitted by the FDA to use cocaine for medical purposes like local anesthesia, recreational cocaine use is illegal and likely to result in a substance use disorder. 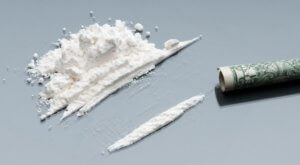 The majority of cocaine use is recreational use. When sold on the streets, cocaine takes on the appearance of a fine, white, crystal powder, and is often mixed with “fillers” such as flour, cornstarch, or talcum powder. However, some batches of cocaine are cut with psychoactive substances such as amphetamine, fentanyl, or synthetic opioids. These fillers are meant to increase profits for drug dealers and manufacturers, but they can come at the expense of a person’s life. Adulterants like fentanyl and other synthetic opioids can lead to life-threatening overdose, even in the smallest amounts.

Cocaine laced with fentanyl is more common today than ever before, making recreational cocaine use risky a game of life or death. In fact, the CDC reports that cocaine overdose deaths skyrocketed from 19,927 in 2020 to 24,538 in 2021.

Cocaine is a central nervous system stimulant that increases levels of dopamine in the brain. Dopamine is a neurotransmitter associated with reward, pleasure, and decision-making. Increased levels of dopamine lead to effects like:

Cocaine is usually snorted, although some users may inject or smoke it. The high is relatively short-lasting, so people often go on “cocaine binges” where they use a lot of cocaine over a period of time to sustain the energizing effects.

When the side effects of cocaine wear off, individuals may experience a “crash” during which they become irritable, fatigued, hungry, and easily agitated. These are also symptoms of acute cocaine withdrawal.

Regular cocaine use is habit-forming and often leads to addiction, but it is also harmful to physical and mental health. Cocaine abuse is especially dangerous because of the strain it produces on the heart. This strain is so intense that cocaine use can cause sudden death in the form of a stroke or heart attack.

Other potential long-term effects of cocaine abuse include:

Signs and Symptoms of Cocaine Addiction

Like other stimulants, cocaine makes people feel energized, talkative, and alert. As a result, people who are addicted to cocaine may talk quickly, sleep very little, experience weight loss due to a lack of appetite, and seem extremely energized or alert most of the time.

Addiction is more than just using cocaine, though. Cocaine addiction is characterized by obsessive and compulsive drug use that continues despite consequences.

People who are addicted to cocaine will use it so frequently that they become less sensitive to the drug. Reduced sensitivity makes people have to take higher doses to feel the same effects as before. This is known as tolerance and is a tell-tale sign of addiction.

People who develop a tolerance to cocaine may also become physically dependent on the drug. Physical dependence occurs when the body becomes so accustomed to having cocaine in the system that the person cannot function normally without it. Someone who is physically dependent on cocaine will experience symptoms of withdrawal if they stop taking it suddenly.

The NIDA estimates that about 1.3 million people aged 12 and older had a cocaine use disorder in 2020.

If you or someone you love is struggling with cocaine addiction, speak with an admissions counselor at Sheer Recovery today. We can discuss your treatment options with you and help you find care.

Just hours after stopping cocaine, people who are addicted to it may experience mild to moderate physical and psychological withdrawal symptoms. The severity and duration of withdrawal depend on how long the person has been using cocaine, the severity of their addiction, and individual health factors.

Common symptoms of cocaine withdrawal include:

Cocaine withdrawal is generally not life-threatening, but it can be difficult to accomplish alone so people are encouraged to detox under medical supervision. Medical detox centers in California can make the detox process easier by prescribing medications and providing 24-hour support.

While there aren’t any medications approved to treat cocaine withdrawal and dependence, other medications can be used to reduce the severity of symptoms. For example, anxiety or irritation can be alleviated with benzodiazepines like Valium, and symptoms of psychosis or paranoia can be reduced with sedatives or antipsychotics. More minor symptoms, such as aches, pains, or nausea, can often be managed with over-the-counter medications.

Once withdrawal symptoms subside, clients will work closely with a substance abuse counselor to transition into the right cocaine addiction treatment program for them.

After detoxing, individuals must receive comprehensive psychiatric and mental health treatment to heal from the root causes of their substance abuse. Since addiction is often the result of mental illness, trauma, or buried emotions, it is vital to discuss these things during treatment and learn how to cope without drugs. Treatment also focuses on educating clients about the disease of addiction and teaching them relapse prevention skills.

Sheer Recovery uses a variety of behavioral therapies, such as cognitive behavioral therapy (CBT) and motivational interviewing (MI), to help clients achieve long-term sobriety. Each person at our recovery facility receives an individually-tailored treatment plan that is designed uniquely for their situation, substance abuse patterns, and mental health.

There are a few different options for cocaine addiction treatment in California, including:

Recovery doesn’t stop when treatment does, which is why our team is dedicated to working closely with each client, helping them build an aftercare plan, and applying their relapse prevention skills to real-life scenarios. With comprehensive, ongoing support, anyone can achieve sobriety.

At Sheer Recovery, we provide our clients with a secure, private, and comfortable residential recovery environment where they can heal as our therapists guide them through group and individual therapy sessions. Our dedication to patient care and excellence guarantees the safety and well-being of clients during their stay at our facility.

Once you finish treatment, you will have a thorough understanding of your addiction as well as the skills and knowledge you need to stay sober. Don’t wait any longer to take the first step toward getting the treatment you deserve. Call now to speak with one of our compassionate admissions counselors about your treatment options.